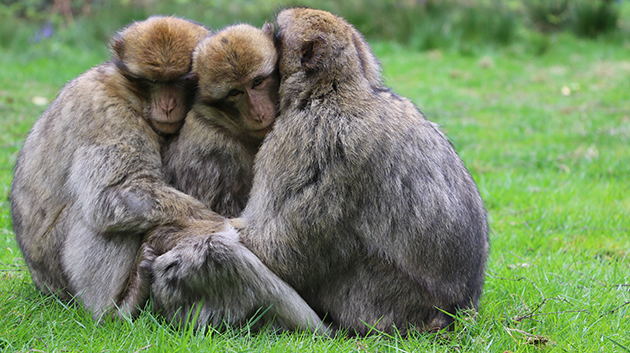 Monkey Forest is a 60 acre forest located within Staffordshire, England. The forest is home to 140 free roaming Barbary macaques and functions both as a research site and a nature park open to the public.

The Monkey Forest at Trentham was first opened in 2005, following its three sister parks, two of which are in France (La Montaggne des Singes and La Foret des Singes, opened in 1969 and 1974, respectively), and the third in Germany (Affenberg Salem, 1976). All four parks are actively involved in the preservation and conservation of the Barbary macaque and help to raise public awareness regarding threats to the species survival. The parks are also involved in a reintroduction program that has seen over 600 successful reintroductions to the Barbary macaques' natural habitat in Morocco.

The monkeys in the forest are fed a diet of fresh fruit and vegetables and have ad libitum access to water.

The Barbary macaque is an old-world primate species native to Algeria and Morocco, and the only species of macaque distributed outside of Asia. These monkeys live in gregarious, mixed groups of 10-100 individuals. Troops are matriarchal and males are known to participate in the rearing of the young.

The macaque subjects used in our studies live in the monkey forest at Trentham.