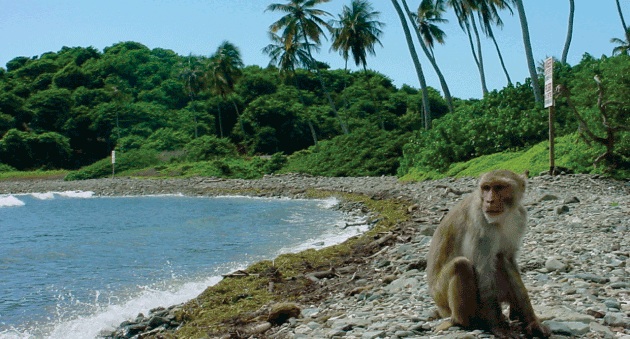 Cayo Santiago is a small island (38 acres) just off of the southeastern coast of Puerto Rico. Cayo Santiago is a research field station which is home to approximately 1000 free-ranging rhesus macaques. The colony is run and maintained by the Caribbean Primate Research Center and the University of Puerto Rico, Medical Sciences Campus.

The monkeys currently living on Cayo are divided into a few natural social groups. The individuals in the current colony are the direct descendants of 409 monkeys who were brought to the island in 1938. Monkeys are fed a diet of Purina monkey chow from three feeding locations on the island. The population also eats a variety of other indigenous foods, including leaves, fruits, flowers, and soil. Monkeys have ad libitum access to water at a number of locations.

Because of almost 70 years of research at this field site, subjects are well habituated to human experimenters. We and colleagues have tested subjects from the Cayo Santiago population for the past nine years.

Rhesus macaques are an Old World monkey species native to Afghanistan, India, Thailand and Southern China. Rhesus monkeys are brown or grey in color and have pink faces which are typically bereft of fur. This species is one of the best known monkey species and is commonly used as a primate model in neuroscience.

Our rhesus monkey subjects live on the island of Cayo Santiago in Puerto Rico, which is run and maintained by the Caribbean Primate Research Center.